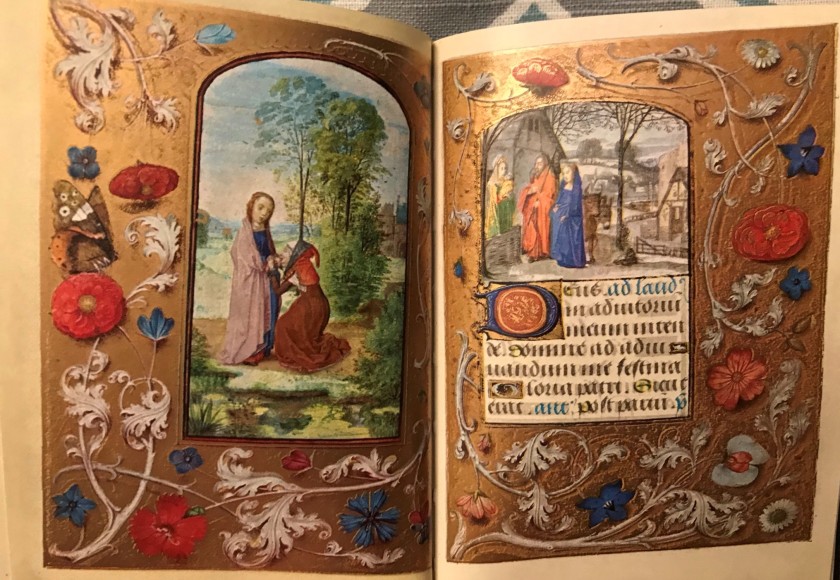 I have been fascinated with Books of Hours for a long time. I finally found this beautiful replica on Amazon and wanted to share with you what it looks like on the inside and a little bit of information about it. I am by no means on expert of these types of books, nor manuscripts for that matter and welcome any input from others who know more about it than me.

The Book of Hours

A Book of Hours is a devotional book that was popular with Christians in the Middle Ages. A typical Book of Hours contained the following:

Who was Mary of Burgundy?

Mary of Burgundy was the only child of the Duke of Burgundy, Charles the Bold and his second wife, Isabella of Bourbon. When the duke died at the Battle of Nancy in 1477, Mary inherited all her father’s Burgundian lands, making her the richest woman in Europe. She married Maximilian of Hapsburg who eventually became the Holy Roman Emperor, Maximilian I after Mary’s death.

Mary was the mother of Philip the Fair, who was the husband of Joanna of Castile, daughter of Ferdinand of Aragon and Isabella of Castile. She also had a daughter, Margaret, Duchess of Savoy.

Mary was killed in a riding accident during a falcon hunt when she was 25 years old.

Who was the Master of Mary of Burgundy?

Who owned the Master of Mary of Burgundy Book of Hours?

This book of hours was created for a man named Engelbert of Nassau. Engelbert was Count of Nassau and Vianden and Lord of Breda, Lek, Diest, Roosendaal, Nispen, and Wouw. He was a knight and a leader of the Privy council of the Duchy of Burgundy.

It is believed that Engelbert passed the Book of Hours on to Philip the Fair, son of Mary of Burgundy, as a gift. Philip’s coat of arms was added to the book after he took possession.

The Master of Mary of Burgundy Book of Hours has gold-gilded pages and is printed on heavy, glossy paper. The printed version of each picture looks as if it were painted in real gold, giving you a little idea of what the original would have looked like. It is very colorful, as you can see from the above pictures.

Get your copy of The Master of Mary of Burgundy Book of Hours here.

On this day in 1578, James Hepburn, the 4th Earl of Bothwell and 3rd husband of Mary Queen of Scots died after a 10 year imprisonment.
Happy Birthday, Thomas Jefferson. Born on this day in 1743. Architect, inventor, farmer, musician, polyglot, Governor of the state of Virginia, principal writer of the Declaration of Independence, 3rd President of the United States. 💕💕💕
I have a weakness for pirates. 🤤 I WILL write a pirate story one day! 😂 This is my positive affirmation for the day.
Mary Queen of Scots Arriving at the Tower of London, by Robert Alexander Hillingford, 1900.
My husband,Stephen, tried to give me a kiss before going to bed...Oscar would not move out of the way so Stephen could reach where I sat on the couch. He had to walk to the other side of our huge ottoman because the dog wouldn’t get out of the way. 😂🤷🏻‍♀️
They say truth is stranger than fiction which is why I love researching for historical fiction. You can’t make some of this stuff up! 😂
Read any “great” books lately? That would be A Court of Silver Flames for me right now. 😂 Wowzers!
My condolences to our British cousins across the pond.
Chemise said to have belonged to Mary, Queen of Scots in which she was executed at Fotheringhay Castle.