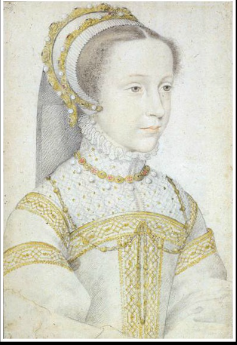 There is no doubt that Mary Stuart, the Queen of Scotland who was executed by decree of Queen Elizabeth I has become one of the most loved, or at least one of the most talked about monarchs of all time.

There has been much study on Mary and depending on what side of the historical fence you may sit, you will either think she was a treasonous, power-hungry floozy or an innocent victim of other power-hungry men who used her. Countless books, movies, plays and even television shows have been written about her life. Much of it romanticized, her life has given those of us who love the 16th century and the Tudor era much to debate and dream about.

In the coming year I will be posting a series of blogs that examine some of the people who either had an influence or detriment on Mary’s life in some way. Though she only lived 44 years, she touched and was touched by countless lives that also had an impact on her.

If you are like me, I read a story, see a name, want to learn more about that person and read everything I can get my hands on about them until my thirst is quenched. That is what drew me in to the story and life of Mary, Queen of Scots in the first place. These posts are not meant to be an exhaustive coverage of everyone that Mary Stuart came in contact with. I have chosen just a few of the many people who lived during that time and had some kind of interaction with the enigmatic queen. My hope is that these posts will spark an interest and drive you to want to learn more about the woman, her life and times and the people who we can say make or break Mary, the Queen of the Scots.

Here is the schedule for the upcoming blog posts in the Principal Players Series: