Book Title: The Mermaid and the Bear

Setting: Scotland, during the reign of King James VI

Before I go any further, I just have to say, this is one of the most beautifully written books I have ever read. Yes, it is written in one of my favorite time periods, and yes it takes place in one of my favorite places in all the world, but when you combine that with the almost poetic style of Sinclair’s writing—sigh!

Ok, I know it sounds like I’m gushing, and maybe I am, but deservedly so. Sinclair’s development of characters is charming, making you love the characters she loves and hate the characters that she hates. Or, if she doesn’t hate them, she sure does a good job at making me do it for her.

Isobell is an English girl trying to escape the prospects of an abusive marriage to a wicked man. She comes up with a plan to escape to Scotland, leaving her privileged life behind to serve as a kitchen maid on the estate of the young Laird, Thomas Manteith. Isobell finds solace in the beautiful and spiritual countryside of Scotland and I loved viewing her world and experiencing it all over again through her eyes. From the flowering trees, the birds and other wildlife to the ancient stone circles and rocky cliffs of this magical land, Sinclair’s writing is a treat for the senses.

The storyline is beautiful too. The love Isobell shared with her “light of the world and salt of the earth” as she called him, was well written, leaving no room for doubt of the love they shared for each other, yet without some of the awkward details that other stories offer.  And while I enjoyed experiencing all the wonderful sights (and feels!) with Isobell, I was always waiting for the proverbial “other shoe to drop”, and Sinclair did not disappoint!

I have read several books having to do with witch trials, from the North Berwick witch trials in Scotland, to the Salem witch trials in America. All have been well written, but Sinclair’s description of not only the treatment of the accused witches and the bodily harm that they endured, but the spiritual, mental and emotional trauma that these accused women (and men, at times) must have endured, is brilliant.

I also enjoyed Isobell’s exploration of Celtic spiritualism, Catholic rites and Reformed practices as she sought for her own truth. It is an excellent example of Scotland’s own spiritual journey throughout history.

I will read this book again. Now that I know there is a beautiful end for Isobell (admittedly not the end I was expecting!), I will read it for the pure enjoyment of meandering the deeply moving countryside of Scotland once more.

If you would like to see more of Ailish Sinclair’s writings or see her beautiful pictures of Scotland, visit her on her blog at https://ailishsinclair.com/

To purchase a copy of The Mermaid and the Bear click here. 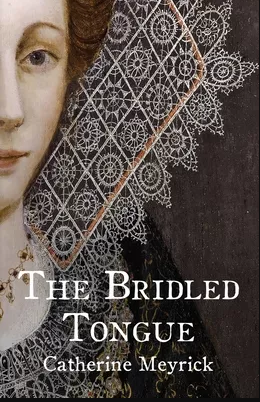 Alyce Bradley is practically past her prime in terms of making a good match. When she is faced with marriage to a man that repulses her, the offer of marriage from another man, though rumored to be a womanizer and a pirate, almost appeals to her.

Alyce makes her choice, and has to live with it. And slowly she is making it work. But when jealousy and bad blood cause Alyce to be accused of damnable deeds, she will face the most difficult trial of her life.

She is not the perfect, beautiful protagonist that you see quite often in fictional stories, which is one thing that makes this story unique. Alyce has a sharp tongue, is quite practical and solemn, and has a hard time showing her affection. But she has likable qualities, and the one I found to be most admirable was her ability to bite her tongue when those around her were being rude to her. I found myself quite often thinking of all the things I would have said in response to the characters that verbally mistreated her, had I been in her shoes! (Yeah, I probably would have been accused of witchcraft for being insolent, incorrigible, or whatever other bad qualities that get attached to women who aren’t demure and meek. LOL)

Meyrick gives you a wonderful insight into the everyday life of a late 16th century English household and the workings of a manor house. Her attention to detail concerning the court systems, jails and commerce of the time period are wonderfully described making you feel as if you are experiencing it for yourself. She demonstrates perfectly how tittle-tattle, jealousy, and revenge played a large part in the witchcraft accusations in the 16th century, and it is easy to see how one might find themselves on the wrong side of the law, just because a neighbor (or worse-a friend or relative) had it out for them.

Alyce had so much stress in her life. From a husband whom she was trying to get to know and understand in the small snatches of time they were allotted together, to a jealous sister, and a delusional former suitor. I fretted throughout the story as to how she was going to get out of her predicament. Meyrick really knows how to build the tension and keep you guessing as to what is going to happen next. I worried myself to find out how all the loose ends were going to come together to resolve the conflict in poor Alyce’s life. I am a sucker for a knight in shining armor and I tend to lean toward the whole rescued damsel in distress trope. Alyce’s husband tries to be that for her but can’t. And I’m ok with that. I was still pleased to see the author give Alyce the happy ending that she deserved!

This was my first exposure to reading books from this author. I do plan on reading more of her wonderfully detailed works.

For more information about author Catherine Meyrick visit her at: https://catherinemeyrick.com/

To purchase The Bridled Tongue visit: 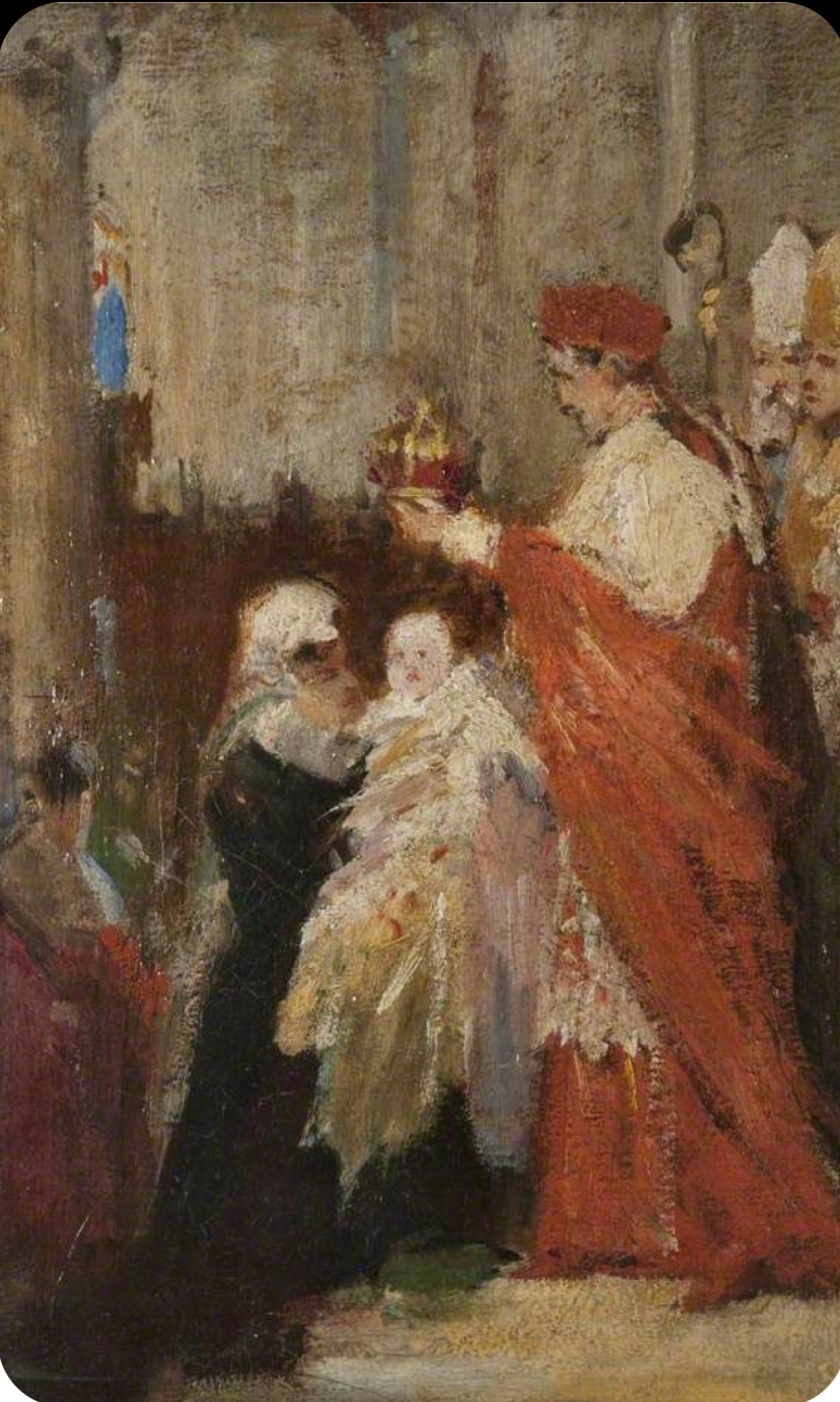 Nine month old Mary Stuart was crowned queen of Scotland on September 9, 1543.  She had actually become queen on December 14, 1542, when she was only six days old. This was the day that her father had died, making her the youngest female to become queen.

Mary’s mother, Mary of Guise, had schemed and plotted for months, in an effort to avoid Henry VIII’s offers of marriage to her daughter. He wanted the little queen for his son, the future Edward VI. However, Mary of Guise, being a French Catholic, wanted nothing to do with the Protestant Englishmen. Although James Hamilton, the Earl of Arran, had been appointed as regent to the young queen, her mother was very much in control of the young child’s comings and goings. Her wit and political savviness enabled her to remove the young Mary from Linlithgow Palace, where she was born, and where Arran felt he had more control over her. By July, the baby had been moved to Stirling Castle, Mary Guise’s castle of choice. This removed the infant queen out from under Arran’s control and allowed her mother more time and freedom to plot how to free Mary from the reach of the English.

On the ninth of September, Mary was carried to the Chapel Royal at Stirling Castle and crowned Queen of Scotland. It was a very solemn affair, having conferred not only civil legitimacy on the young queen, but it also validated her religious rights as queen as well.

According to biographer, John Guy, three items of significance were used during the ceremony. The Earl of Arran carried the crown, the Earl of Lennox held the scepter, and the Earl of Argyll carried the sword of state. The scepter was given to James IV in the 1490s by Pope Alexander VI, and the sword was obtained from Pope Julius II in 1507. The crown had been worn by Mary’s father, James V, at her mother’s coronation in 1540. These three items are known collectively as the honors of Scotland and are still on display at Edinburgh Castle today. However, they were not used together until the coronation of Mary.

The crown was, of course, too big for a baby to wear. Instead, Cardinal David Beaton held the crown over Mary’s head. He also anointed her with holy oil and said a blessing over her during the ceremony.

Traditionally, heralds would read aloud the royal genealogy, a list of titles and honors that could take up to a half an hour to recite. However, the infant queen had a different plan. She squawked and wailed throughout the ceremony, causing the typical proceedings to be cut short.

The coronation may have been a solemn affair, but it was followed by banqueting, masques, and dancing afterward.